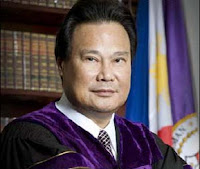 Yesterday we posted this question on our Twitter and Facebook accounts. Below are some of the responses we got from you.


"Since the Chief Justice said he would appear in the trial, if you could ask him the questions directly, what question(s) would you ask?"


If you want to give/post your own questions, please leave a comment below or tweet using the hash tag #questionsforCJ


Joel P Garduce: Honorable Chief Justice, why did you choose for your defense in this impeachment trial lawyers from powerful law firms that surely have important cases pending in our justice system, if not the SC itself? Isn't it obvious that even if you are acquitted from this trial, you will have clearly compromised the integrity of the SC and the office of the Chief Justice itself, whether or not these lawyers handled your case pro bono?

Joseph Pangilinan: Would you consider the SALE of 90% BGEI shares of stocks by your wife Mrs. Cristina Corona, for Php28,000, to your daughter Carla Corona Castillo, a legitimate, ethical, and morally palatable transaction?  Who were the lawyers of the said transaction, what were their law offices, and did such offices have any cases pending in the judiciary?

Sheila Mae Tabamo:  I'd like to ask the CJ about the honors he received while he was a student & why he allowed misrepresentation of his credentials

Cez Montejo: Are you willing to submit yourself and your family for further investigation once irregularities have been found in ALL THE COURT CASES of your immediate family?...and allies? The Basa Case clearly appears to be a brilliant machination of legal minds that brought about the stripping off of wealth from the original owners, the BASA family, your wife's kin. Do you think it's fair? You might be victorious in crippling the very family of your wife bourne from her stealing the rent. The machination led to practically rendering the case against your wife a JOKE. Hence, the need for your wife and daughter to reveal further involvement of other parties only your wife and daughter can explain. Its relevance to the SALN? Your family appears to be "double owners" of the company, as a result of the execution of the writ, and by purchasing of the shares by your daughter. Kindly explain why it is not declared in your SALN?

Patrick C. Guanzon: Why did u not hear the government 1st before granting the TRO to GMA when she was about to leave the country?


Steven Baldesco Why do you have so many bank accounts? Are you trying to escape accountability in doing so? Are you willing to let the Impeachment Court open every single one of those accounts? And for the sake of the country, won't you just resign and spare the Filipino people from more of your melodrama?

Tanghod Pinoy: Why did u accept a midnight appointment? Why did BGEI money ends up in your account? Why did u close PSB acct n open another?

Patty Reyes: My question for CJ is...why didn't you put all your assets in your previous SALNs? Are you hiding anything?

Tess Gulledge: Sir, my question would be how did he acquire his assets and can he show us documentation explaining the acquisition.

Sinawe Cali Mamao CJ Corona, will you let your dollar account be opened by the Impeachment Court?

Cez Montejo Are you the legal counsel of BGEI with your daughter now being the major stockholder? Since you are not, will you allow your daughter to declare BGEI's networth and explain other circumstances in behalf of BGEI? What is the legal definition of fair ?

Marie Keith Habal For the sake of peace and unity in our country, would you be willing to set aside your personal interest and relinquish your position even if in yourself, you believe you have done nothing wrong?

Nelson Salazar Badilla  How come you earned millions of money and acquired several properties when in fact your only job for the past several years was serve the public?

Rene Pedro C. Baltasar CJ will you waive the TRO on your supposed Dollar Accounts? Why not come clean and save your family's reputation?

Daisy Zapanta-Nodque Acquitted or not, will you still hold on to your position as CJ? or get out of SC to enable it to start fresh & anew... because whether you agree or not... the reputation of SC has somehow been affected because of you...does it come to your mind to spare SC from all the brouhaha and leave the post to someone whose reputation has not been tarnished?!

Linda Pangilinan Why don't you spare us the drama and quit while you are ahead?

Joel Ferrer CJ Corona do you consider yourself to be an Unbiased and Fair judge when it comes to cases of the Arroyos?Do you have a clear conscience, and do you sleep peacefully at night?

Philip Camara:  Mr. CJ, in your SALNs you placed the value of your real estate acquisitions on the basis of government assessed values rather than the acquisition price as has been revealed and defended in this trial. True, there are no clear cut rules on valuation for SALNs. However, since you took out a loan of P11 million which rightfully enters the "liability side" of your SALN and this loan is placed at face value, how can you justify using any other value for the "asset" side apart from the purchase price considering that doing so (using a government assessed value) will result in a transaction that causes the Networth to become negative for that transaction and therefore undervalue the networth in total?

In other words, if I take out a loan of P11m and buy a property for P12m and declare it in my SALN at the purchase price, then my networth increased by P1m, which is fact the truth of what that transaction does to my networth. But if I declare the property that I purchased for P12m using a loan of P11m at say only P3m justifying this based on government assessed value, then my Networth will decrease by P8m (P11m Loan - P3m new asset at declared value).

Is this kind of reporting on your SALN your idea of a public official declaring the true value of it's networth? Is this even logical?

For me it may be defensible if no loan was contracted. But with a loan, declaring any other value apart from the purchase price is an attempt at misleading if not outright lying to the public about one's networth, which is the whole purpose of filing the SALN in the first place. Please explain.

Pompeyo Pedroche : 1. Did he know that he accepted an unethical midnight appointment to the highest position in the judiciary? 2. Did he really have that huge amount of money, granting it's not ill-gotten? 3. Why keep such ridiculously enormous amount? For his grand children's grandchildren? 4. Did he really embellish his Ateneo academic records or someone like Midas did it but keeping quiet about it until it's exposed? 5. Is he paying gratis to all these abogados de Campanilla to defend him from the charges? 6. How much sleep does he enjoy since the trial began? 7. Where do his knights of the Round Table? In one of his mansions? Just Delivery Pizza for dinner?

Cocoy Dayao: Why did you take the job of Chief Justice?

How many millions of pesos do you have?
Why don't you just resign?
Why do you sound like a trapo and not a Chief Justice?
What can you say to convince me that your wealth is not ill-gotten?


mlerias: Which one is your payroll? Isn't it suppose to be in a government bank like Landbank? I didn't hear any mention of that at all so I don't know where all the rest is coming from when you are not suppose to have any businesses as CJ?

Posted by Kiko Pangilinan at 1:16 PM

Which one is your payroll? Isn't it suppose to be in a government bank like Landbank? I didn't hear any mention of that at all so I don't know where all the rest is coming from when you are not suppose to have any businesses as CJ?

My name is.Mrs.Anna Daniel. I live in Ukraine i am a happy woman today? i need to use this time to tell all people how i got my loan from this honest and God fearing man loan lender that help me with a loan of $84,000 please contact him. if you also need a loan without any problem he name is Dr Purva Pius email {urgentloan22@gmail.com} tell him that is Mrs.Anna Daniel that refer you to he contact Email {PurvaPius22@gmail.com}