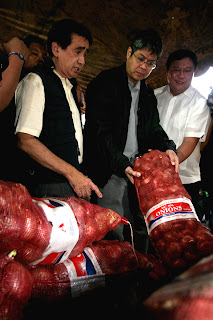 According to Sibuyas ng Pilipinas Ating Alagaan (SIPAG) Foundation officials, an umbrella group of onion-growers, there is a significant surplus with this year's onion production of 124, 900 metric tons and Philippine onion demand only amounts to 101, 200 metric tons annually.

We are following thru with our previous efforts to ensure that the seized onions do not end up in the market as they pose health risks because they have not been subjected to sanitary inspection. It’s bad enough that our local farmers are losing the competition with cheaper smuggled onions.

We urge the BOC and other concerned agencies to prosecute these heartless smugglers and traders that are effectively crippling our economy. We have requested the BOC to give us updates regarding the status of these cases, and we will continue with our efforts. We also urge the private sector to join us and be vigilant in our battle against smuggling.
Posted by Kiko Pangilinan at 3:37 PM No comments:

RP needs to practice what it preaches

We believe that the Philippines can learn from Vietnam's proper implementation of agricultural programs to strengthen its own agricultural sector.

The difference between Vietnam and the Philippines is the effective implementation of their policy. We taught them what they know, so the technology and knowledge are already at hand. What we need is a strong resolve to address agricultural issues that have been hounding us for decades.

For centuries our farmers and fisherfolk have provided us the food we need to survive. It’s time we ensure that their plight is addressed, and the right approach is to up their incomes by providing them the needed support in terms of available credit, infrastructure and facilities, research and development and access to markets for their produce. A strong partnership between government and private sector sharing a common vision of creating a robust and vibrant agriculture and fisheries economy is key."

The Aquino administration in the beginning of its six year term has a golden opportunity to lay down a clear vision for agriculture and fisheries modernization.

We cannot achieve developed nation status in the next 15 years unless we create more jobs and wealth in the agriculture and fisheries sector. The key to food security and sufficiency is to create wealth for our farmers and fisherfolk.

Image taken from Agroviet
Posted by Kiko Pangilinan at 3:27 PM No comments:

It would be best for the Supreme Court to consider the matter a closed case and refrain from pursuing the contempt case against UP College of Law faculty members.

The position taken by the UP faculty members on the issue finds solid support and is buttressed by the dissenting opinion of justice Sereno. This alone should prove that there is no basis to sanction the UP College of Law faculty members.

Judicial restraint will best serve the interest of the Supreme court. With all due respect, the Supreme Court should learn to choose its battles and to my mind, this isn't one of them.
Posted by Kiko Pangilinan at 3:22 PM No comments:

Congress should consider enacting a supplemental budget to address the damage wrought by typhoon Juan. Damage to agriculture alone is at P7.5 billion and rising, yet the calamity fund for 2010 is nearly depleted. We must act swiftly and allocate the needed funds to ensure that rehabilitation isn't hampered by lack of funds.

Without the funds, rehabilitation efforts will be meaningless and our people's suffering will not be abated. Let's act now to ensure that we can provide our people with a cushion to soften the blows of all this damage. The sooner we allocate funds, the sooner the sooner our countrymen can rise back on their feet.
Posted by Kiko Pangilinan at 3:09 PM No comments:

We slam oil companies who have raised their prices in the wake of Typhoon Juan's onslaught.

That is insensitive and uncalled for--it's like rubbing salt to our wounds.

I don't see why they need to raise their prices NOW. Hindi ba nila puwede munang ipagpaliban 'yan? Now's a time when we all need to work together to rebuild after the world's worst storm of the year. To even consider raising prices now is bordering on criminal already.

We will look into crafting legislation that bars price hikes during times of calamity to prevent corporate abuse especially when consumers are at their most vulnerable.
Posted by Kiko Pangilinan at 3:07 PM No comments:

When calamities strike, what happens to our farmers? The state must care for those who break their backs day in and day out to feed our people

Typhoon Juan has left many of our fellow Filipinos, especially those in the northern provinces, displaced and once more worrying not only about their security for now, but also about their source of livelihood for months to come.

The National Food Authority reported last night that "up to 70%" of unmilled rice crops in the northern Philippines could be damaged by Typhoon Juan.
News reports also quoted Andrew Villacorta, DA executive director in Cagayan Valley, as saying that estimated losses could go up to 159,000 metric tons, covering 88,000 hectares, in Isabela, and up to 63,000 metric tons (43,000 ha) in Cagayan province.
Imagine that. 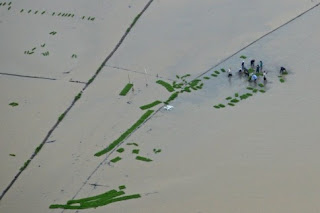 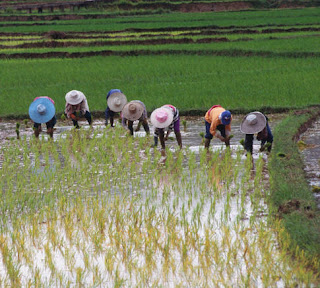 We also need to start developing long-term, sustainable measures to address the usual threats faced by our farmers. The Philippines is battered by an average of 20 typhoons a year, yet we always seem to be caught by surprise when a storm hits. We ought to strengthen crop protection measures for our farmers, who are always the biggest losers when faced with natural calamities.

We did some research on crop protection facilities and practices, and we found an April 2009 study by by Celia M. Reyes and Sonny N. Domingo for the Philippine Institute for Development Studies. Entitled "Crop Insurance: Security for Farmers and Agricultural Stakeholders in the Face of Seasonal Climate Variability", it revealed that "formal lending institutions and crop insurance were virtually non-existent in select farming communities" in Isabela. Further, "local usurers and loan sharks have long been profiting from smallholder agicultural workers through high-interest loans", leaving farmers "up to their necks in debt."

This brings me to a point I've been trying to stress in recent statements. We really need to sit down and craft a more comprehensive review of agricultural policies under the Aquino administration, together with all concerned sectors. Our farmers need our help. We owe it to them. The state must care for those who break their backs day in and day out to feed our people, by providing state-funded progams that will help tide them over in the short run and raise their incomes and the quality of their lives in the long run.
Posted by Kiko Pangilinan at 10:57 AM No comments:

We congratulate Ms. Lea Salonga for having been named Goodwill Ambassador of the UN Food and Agriculture Organization, alongside Italian actor Raoul Bova, Canadian singer Celine Dion, and American actress Susan Sarandon. Her status will certainly bring much-needed attention to food and agriculture issues, and we hope this paves the way for more discussion and dialogue on the issues that affect majority, if not all, of our people.

As Chair of the Senate Committee on Agriculture, we enjoin all sectors of society to forge stronger partnerships to ensure food security and the opening up of more opportunities for our agricultural workers. We cannot hide the fact that the Philippines is an agricultural country, so we need policies that would address the lack of investments in agriculture, productivity, food security, income and livelihood in this sector.
Posted by Kiko Pangilinan at 2:26 PM No comments:

Why are we setlling for breadcrumbs from the U.S.?

I have been in favor of abrogating the VFA for some time now, especially after seeing how lopsided the treaty has become. Here is the statement I issued today to the press on this matter:


After over a decade of the VFA, are we more secure as a nation? Are our armed forces better-equipped and trained to address security issues? Have we benefitted militarily as envisioned by the agreement? Or has it been a lopsided arrangement favoring the Americans, who have been able to stay here indefinitely, enjoying basing arrangements without paying up?

My message is this: Pay up or leave. If they don't put their money where their mouths are then they should pack up and leave. They are enjoying 'first class amenties' yet are paying dirt cheap rates. Umuupa sila ng mansyon pero ang bayad nila pang barung-barong.

If I recall, Pakistan receives billions of dollars in military aid just to allow US troops access to their territory. We get a few used Huey helicopters and one or two C130 airplanes that have seen better days.

Why we allow the US to throw breadcrumbs at us while it gives champagne and caviar to others is beyond me.

The world has changed dramatically in the last ten years since the VFA was first entered into. It's about time we correct the onerous arrangement and even up the score.

This is about regaining our self-respect as a nation and we most certainly deserve it.

On PNoy mediating between Sec. Robredo and USEC Puno

Finally, the President has stepped in between DILG Secretary Jesse Robredo and DILG Undersecretary Rico Puno to iron out their differences. According to an interview with Sec. Robredo, he and USEC Puno met with the President on Sunday night. It was apparently a “very cordial and a very polite meeting.”

We welcome the swift action taken by the President to address the rift between the two. We hope this will be the last time the President will have to step in to mediate between warring personalities in the official family.

This should serve as a signal to all in the President’s team to focus on doing our work, setting aside our differences and uniting behind the President. We cannot hope to solve the serious problems of our country if we are unable to manage our differences by allowing it to get in the way of the work at hand.
Posted by Kiko Pangilinan at 6:03 PM No comments:

My message to PNoy: Crack the whip; no more Mr. Nice Guy 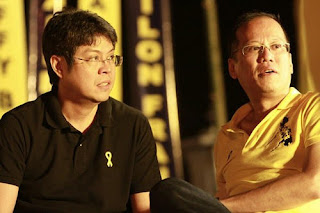 There has been a lot of talk lately about factions within this administration. No matter how much we try to hide it, it is now time to face the issue--and face it squarely.

PNoy himself must crack the whip and tell all those surrounding him that given the serious problems facing the country, without unity there is no way his administration can succeed. I know he has it in him to do so, and now is the time to do it. No more Mr. Nice Guy.

My appeal to those who support PNoy is that we need to learn to work with one another even if we dislike each other. It's about time we acknowledge the existence of all these factions and recognize the need to end it. It will have to start from the top, and I know the President will deliver and act to ensure that all his men will finally march to the same drumbeat.
Posted by Kiko Pangilinan at 3:29 PM No comments:

The high trust rating that PNoy got during the election is unprecedented, so it is no surprise that it carries over after the presidential polls. This political capital is very important in enforcing policies to alleviate poverty, generate jobs, lower prices, and curb corruption--even if the measures are unpopular. This high trust of the people was never enjoyed by past administrations, not even President Cory. But PNoy's men need to keep up and do their jobs well.

* * *
Moving the country forward is a serious undertaking. It requires laser-like precision and focus. Our problems as a country are so serious that without unity we cannot succeed. Without unity we will fail to address corruption and poverty. Our country cries out for solutions, and for sacrifice to see these solutions through. We must all act towards achieving this regardless of the personal costs.
Posted by Kiko Pangilinan at 1:50 PM No comments: